NextStage Pro has 3 camera modes, which can be selected in the Settings menu.

NextStage Lite can only export HD video from the Kinect’s onboard camera, and render out the virtual set.

Captures 720p video from the Kinect’s onboard color camera. By default video is captured as an uncompressed, RGBA .tga image sequence. 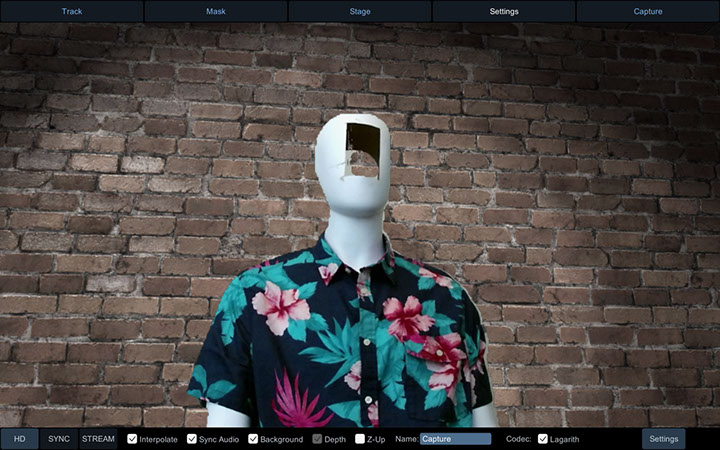 NextStage is designed to run in realtime, and if your computer meets the recommend specifications, it should be able to. However this is still an experimental beta, and it is possible that the application may lose the track, stall, or take too long to process a frame.

With this disabled, NextStage will simply ignore any missed or dropped frames.

With this enabled, NextStage will export blank video frames and interpolate the tracking data for the missing frames. This will help keep the video in sync with other recordings.

Because of the way the Kinect transmits audio, and how the NextStage Beta is programmed, it is possible for NextStage to miss small parts of the audio recording. In the event that this happens, the “Force Audio Sync” option will ensure that that audio is always precisely lined up with the capture. Doing this will create some audio artifacts, but since this Kinect’s audio is only meant to be used as a reference track, it is strongly recommend to keep this enabled.

With this enabled NextStage will export a separate video of the background plate.

Immediately after a capture NextStage will play back the tracking data and render out the view of the virtual set. This export can be cancelled at anytime by pressing the "Cancel" button in the lower right corner.

If no compression codec is enabled this will be saved as a second uncompressed .tga image sequence inside a folder named "RENDER".

With a codec enabled the video file will have the same name as the HD capture with the additional suffix "_RENDER".

In NextStage Lite this feature is enabled by default.

Some 3D applications such as Blender define the vertical axis as the Z Axis, whereas programs like Maya and define it as the Y Axis.

This setting will flip the axis making it easier to import files depending on your workflow.

We also have the ability to change the base name of our capture, the default being; “Capture”.

If you choose to render the background plate, this image sequence will be saved in a subfolder called “Render”, and these files will have the suffix “_BG” followed by the frame number.

NextStage will automatically generate all of these numbers for each capture. These naming conventions are all locked in for now, but there will likely be more customization in future releases.

Sync mode is only available in NextStage Pro. 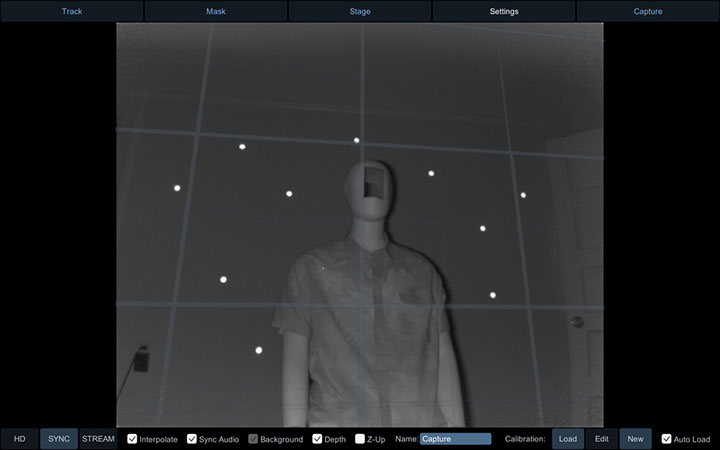 By not capturing color data, NextStage has less data to process and there is a much lower chance of frames being dropped.

The camera tracking data and reference audio tracks are very small in file size, so this mode does not have the same hard drive requirements as the HD mode.

Many of the options are the same as in HD mode. You can interpolate dropped frames, force sync audio, and change your Capture Name.

Lastly there are settings for calibrating an external camera. This will be covered in another tutorial.

Stream mode is only available in NextStage Pro.

In this mode you can stream the tracking data from NextStage to another application using OSC. 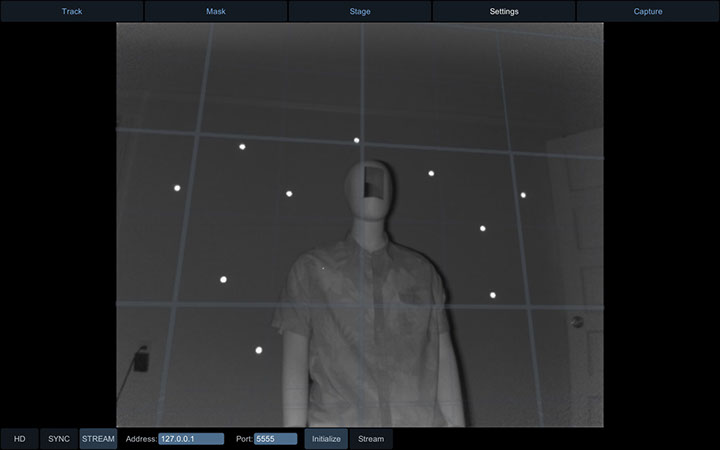 Each tracked frame is sent as a single string containing the Kinect TimeStamp, the Kinect’s Position, it’s Rotation in quaternion values followed by the rotation in euler values.

To begin a stream enter the I.P. Address and Port number. If you are running the external application on the same computer, it should be the default of “127.0.0.1”.

Once these are set press “Initialize” and the client is created. If you need to change these values after setting them you will have to restart NextStage.

Once it has been initialized you can stream the tracking data at any time by pressing “Stream”. NextStage will continue to stream data until this button has been pressed again.

Unity Developers can use the new NextStage for Unity add-on included with NextStage Pro. A full tutorial is available here.