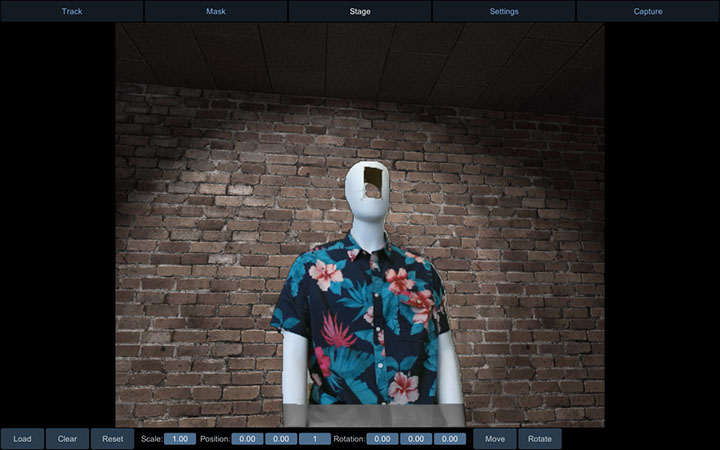 NextStage lets you import a single .obj file to use as a virtual set. The beta version does not support realtime lighting yet, so all lighting effects will need to be pre-baked into the textures.

There are three ways to position your set once it is imported. You can use keyboard shortcuts to “walk” around the set like in a first person video game. You can manually enter in position and rotation values. Finally you can use 3D gizmos to rotate and move the set around the origin point.

The load set button opens up a list of different .obj files within your “Sets” folder. The Sets folder can be found in the main application directory. There is one example set included with NextStage. When you bring in your own sets you will need to keep your image textures within the same folder as the .obj file or else NextStage won’t be able to find them.

Clear Set removes any set you have imported and brings back the default grid.

Reset Set zeros out all of the position and rotation values of the set, and sets the scale value back to one. It resets the set to how it was when you first imported it.

While the Virtual Set menu is open, use the keyboard shortcuts W, A, S and D to mode forwards, backwards, left and right through the set. The keys R and F can move up and down. The keys Q and E rotate the set left and right.

These shortcut keys will only work when the Virtual Set panel is open. So if you need to quickly adjust the set you will have to reopen this panel to do so.

The Scale value lets you resize your imported set. The default value is 1. If you set the value to 2 the set will be twice as big. 0.5 will be half as small. The set will be scaled up and down from it’s 3D origin point. The scale value has no affect on the actual position of the set, although it may seem as though the percieved position has changed.

The Rotation values let you manually change how the virtual set rotated in NextStage. Again these axes are X, Y and Z. X rotates the set around the horizontal axis, Y around the vertical axis, and Z along the back and forth axis. 99% of the time you will probably only need to use the Y value, so you can spin the virtual set around to get different angles. X and Z are available incase you need to to realign the set after importing, or if you need to do something with a slanted set.

The Move Set button works a lot like the Move Origin button in the Tracking panel. Once pressed all of the other buttons will be locked until you exit out of move mode and press the button again. When you’re in move mode a 3 axis gizmo appears at the set’s origin point. This lets you click and drag the set and quickly get into position. While this tool is much easier to use than manually entering in position values, keep in mind it only works when the set’s origin is within the Kinect’s field of view. If you need to position the set further away you will need to manually enter the values, or use the WASD keys.